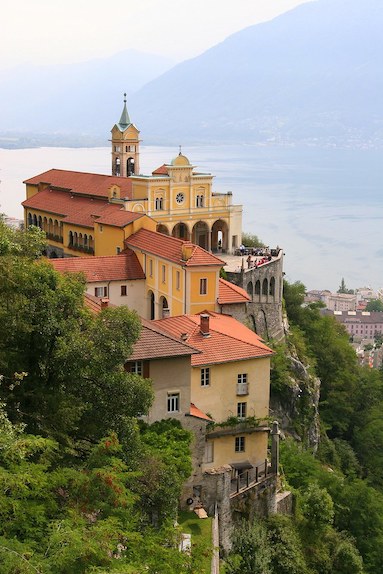 A former student of the S.M.S. (Swiss Mercantile Society) College in London, Mr. W. Braun, was the founding father of the English Club, Locarno. The purpose of the club was to enable the members to converse in English and offer English speaking foreigners an opportunity to meet friends while staying in the city of Locarno and surroundings. Since then the existence of the club had been challenged many times, but thanks to its fine traditions it has persevered. Mrs Aus der Au, a fearless woman and President of the Club during WWII, managed to keep a skeleton club up and running even during this hostile period. Her windows were broken and threats issued because of her Anglophile sympathies. After WWII, Mrs Aus der Au continued with her good work and she helped rebuild the club. By the late fifties 50's it was a thriving British Expat organisation with over 150 members.

Mrs Meschini was President of the Club for over 30 years, but numbers deteriorated, as the pound was repeatedly devaluated and older members passed away. By 1995 there were, unfortunately, fewer than 30 members left and a possible disbandment was discussed at the Annual General Meeting. An American committee member, who taught English locally, Professor Walter Snyder, offered to try and rebuild the ASCL. As President he developed new activities and promoted the club to his students as a place to practice English. By the end of his 11-year tenure, the membership had recovered to over 130. He handed over the presidency in 2006 to Iain Wylie. Iain had an excellent background and education having worked as a professional in various countries. Iain had a great impact on the club, turning it into a social venue for members, who shared international backgrounds and who wanted to keep up their English.

In 2011 Iain passed on the presidency to Yvonne Schneider-Bryant. Yvonne focussed on improving the ASCL website and she also introduced the online mailing system. In 2014 Yvonne handed over the presidency to Nana Marti. Nana made some changes in the policy of running the club efficiently. Nana's educational background and multicultural experiences helped her to run the club in her own style for several years. On 10 June 2019 Nana handed the presidency to Stefanie Bertoneri-Amrein.