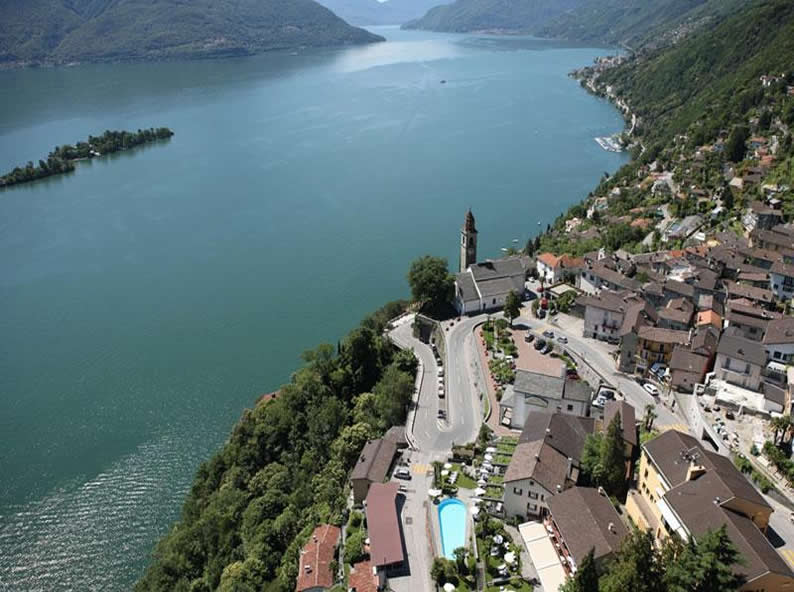 18.01.2018 32 Participants. The Walk begins at the main church of Ronco in the centre of the village and ends at Ristorante Lucca, 200 m uphill from there. We walk on the main road direction Arcegno until Grupaldo. From there we walk back to Ronco on a smaller parallel road, then have lunch together in the restaurant. Before the walk we visit the parish church and Casa Ciseri just opposite the church.

Ronco sopra Ascona
Ronco is a very old settlement and was originally part of Ascona. In fact it was first documented in the 13th century as Roncho de Schona (Ronco di Ascona). The name Ronco appears in many toponyms in Ticino (e.g. Ronco in Val Bedretto, Ronchini in Valle Maggia, sentiero Ronco delle Monache in Minusio). Ronco designated usually a little alley, mainly those on steep slopes with cultivated terraces. In the 15th century the village was big and rich enough to build a large church, it had probably about 500 inhabitants then, only 100 less than today. Seasonal emigration of many workers from Ronco to various towns in Italy was very common and contributed to the relative wealth of the community. In the 1st half of the 17th century Ronco became independent from Ascona. Now for many years already there is a discussion about a possible merger with Brissago, Ascona and Losone, but so far with no result.

Casa Ciseri,  Antonio Ciseri  (1821 – 1891)
The large impressive building opposite the parish church is from the 17th /18th  century and was the residence of the Ciseri family, the most important family of Ronco. We can visit some of the rooms and our Club member Eliane Egger who is very familiar with that place gives us some information about the history of the house. The Ciseri family was a family of painters and decorators. They had a workshop in Florence, where Antonio got his education as a painter. He had quite some success in Italy. Several of his works can be admired in Italian churches and museums. We see two of his paintings in the church of Ronco,  One of his masterpieces hangs in the church of Madonna del Sasso in Locarno: The Transport of Christ to the Sepulchre. His stile was influenced by Raffael, but is more realistic, almost photographic.

Today the socio-therapeutic Foundation La Motta runs the Cultural Centre Ciseri with a little shop in the house. Two large rooms with paintings and decorations are open to the public. La Motta cares for adults with some problems and is based in Brissago. More than 40 persons are accommodated in 5 different houses. The shop in the Ciseri house is open on Tuesday, Thursday and Friday, 10.00 – 12.00 and 14.00 – 17.00.

The church was built in the 15th century at the place of an earlier smaller church.  The niche in the south wall was probably part of the apse of that little church. The church tower was erected a century later by the brothers Beretta from Brissago, the same who designed the two main churches in Brissago. Later on the church has been enlarged and modified several times, especially in the 17th century, when Ronco became independent from Ascona. We see two large oil paintings by Antonio Ciseri:  a St. Antony (saint patron of the painter… and of the undersigned) in the middle of the south wall, and a St. Martin (saint patron of the church) above the main altar. In the choir we still see part of the original late gothic vault and some old frescos, mainly the 12 apostles, 6 on the right side and 6 on the left side. But not all of them have survived. Some have been sacrificed during renovation work in later periods. We have seen the same phenomenon in the churches of Negrentino (Blenio valley) and Gannariente (Bavona valley).

On the North wall of the nave we find three altars, two dedicated to St. Mary, the third one to St. Rochus, considered the saint protector against plague, a much feared disease in the Middle Ages that periodically killed thousands, sometimes millions of people throughout Europe. In this region St. Rochus became very popular and is represented in many churches and chapels. The parish church of Minusio is dedicated to St. Rochus. The big oil painting of the saint which we see here above the altar is quite charming because the saint is accompanied by his dog. The altar itself is noteworthy because made with colourful ”scagliola” technique, that is with polished and painted stucco, in the old time called the marble of the poor, but now considered more precious

The three frescos on the ceiling are too small and too distant to be seen in detail. But they are an interesting testimony of Ronco’s history: Workers from Ronco who had emigrated to Italy sent home money to support their families, but also made donations to their native community, like these 3 frescos and also the marble balustrade separating the choir from the nave which was financed by the emigrants in Viterbo in 1685. Besides money they also brought home some of the religious cults of their work place. The three frescos on the ceiling are very good examples: They represent the Cross of Lucca, St. Rose of Viterbo and a Madonna della Quercia (our Lady of the Oak tree). The original Cross of Lucca is a wonderfully painted and gilded crucifix from the early 13th century preserved in a museum in Lucca, a town west of Florence.  St. Rose of Viterbo is a catholic saint from the 13th century, from the same town north of Rome from where the emigrants sponsored the marble balustrade. Santa Maria della Quercia is the most important sanctuary in the province of Viterbo whose origins date back to the 15th century, the period when the church in Ronco was built. The name of the sanctuary is derived from the legend of a miraculous painting of St. Mary which was originally hanging in an oak tree.

There are also some works of a modern painter in this church: The symbolic pictures on the wall next to the baptismal font on the left side of the entrance and the scenes from the 14 stations of the crucifixion on the right wall. They are the work of Richard Seewald (1889 – 1976), a German artist who because of the new repressive political and cultural climate in Germany emigrated to Switzerland in 1931 and settled down here in Ronco. In 1939 he was granted honorary citizenship of Ronco.

Finally my favourite feature in this church: They are the paintings along the base of the choir. While on the higher level there were the 12 apostles, on the ground level we had the representation of the 12 months. On the northern side only March (blowing wind) and April (bringing flowers) have been preserved. On the southern side instead we see delicious naturalistic scenes of rural life typical for each month. Who would dare today to paint in a church the slaughtering of a pig ? These paintings were executed in 1492 by Antonio da Tradate who was very active in many churches in Ticino. Tradate is a town in Lombardy not far from the Swiss border.  What is also special here: The artist signed with his name and the year of execution in a Latin writing next to the paintings on the south side.