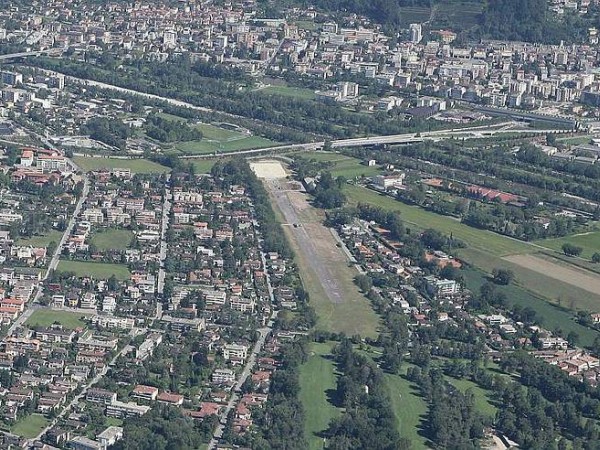 18.04.2018 19 Participants We met in front of the Aerodromo di Ascona. The Aerodromo of Ascona was founded as a private airport in 1947 by Lello Bianda. It could only be used for propeller aircraft and unfortunately it ceased operation in 1997.

The idea behind, was to make it availlable to German and Austria pilots to learn to fly, because at this time, the German and Austrian airspace was controlled by the allied forces. Personalities who got their license in Ascona were Herbert von Karajan, Richard Gruner and Heinz Rühman.

If no one had never walked on a airport-runway before, well now they had a chance! We walked down the runway and then down Via Patrizia to the Lido Patriziale di Ascona.

We walked along the lake, by the Lido di Ascona and skirted around the Ascona Golf Course and the beautiful Marina. The Lido was built in the 60ties and in 2003 it merged with the Bagno Pubblico. With 80'000m2 it became the biggest open air public beach in Switzerland. Today they are again separate entities and the Lido has 40'000m2 with parks, beaches. volleyball fields, diving platforms and several bars and restaurants.

The Golf Club Partriziale di Ascona was founded in 1928 and has 50 hectares, 18 holes and a total length of 5324 metres. The course was designed by the English architects Colt & Allison. With the help of the English Architect and landscaper C.K. Cotton, the Golf Course now has beautiful indigenous trees and flower beds. In 1999 the course was declared rank 1 of Swiss Golf Courses and has retained this ranking until today.

Porto Patriziale Ascona, This marina was opened in July 1997. It has 247 berth in different sizes in 5 categories. The port has one mole that can hold a waterlevel of up to 5 metres. There is also a Restaurant "Vela Bianca" with space for 57 guests.

As were running out of time, we decided not to walk down the Sentiero del Segnale, which is part of the "Cardio Walk" Ascona, but to cut short and head directly, past the Castello del Sole, to the Winery of Terreni alla Maggia., where we were met by Direttore Fabio Del Piero and Mrs. Fernanda Raas.

We had organized a private tour through the working farm, the vineyards, the rice fields, cornfields and tea-bushes. Our guide was Mr. Del Piero. This tour took about 20 minutes. After our tour we had a "private wine tasting" - just for our Club in the new tasting room, where we also enjoyed regional cold cuts and cheese.
After this tasty and interesting Lunch we walked back to the parking lot.

The entire walk took approx. 1 hour and 30 minutes, the terrain was completely flat

There were plenty of places to stop and we enjoyed the magnificent view and the trees and flowers were in full bloom - perfect for our Spring Walk.